Okay,  the Ol’ Dog will be the first to admit our SAG-AFTEA website looks great!  But, but, but  looks ain’t everything!  Content is kind of important!  For instance,  one of the headlines still up on the website!

If you follow the link there’s no new info!  So has it reopened?  Might be helpful to members effected, you think?

Okay, I know we’re in showbiz.  But our membership website –paid for with OUR dues money–should be for more than show!!!

So let’s see how long this past useful headline stays up–and if it’s updated for those that need to know.  In the meantime, all the best to our fellow Miami members and those in Florida!!!

Ken you really need to talk to 20th!

Ah, so Mr. Howard  what do you need to talk to Mr. McCann about?  Well in general how about the rash of complaints to our guild concerning  the mistreatment of our background folks at Fox.  And more specifically the incident that took place last Friday in which a SAG-AFTRA extra was denied access to the Fox lot to work a show because that extra allegedly spoke back (abusively) to a security guard.

Well, to be fair Mr. president, perhaps it’s not as bad as it seems.  After all, if it were,  why were  20th security guards seen giggling in the background as  one of our SAG-AFTRA members was being ‘escorted, off the lot.  By the way, the escorting was being done past fellow SAG-AFTRA background actors waiting to enter the lot!  (You think there was a subtle message there?}

Oh, and Mr. President if you’re not sure all this happened the way I’ve reported, might I suggest you request to Mr. McCann that he turn over to you the film. that he claimed (at the time) recorded the entire incident!  Oh, again, and you might want to do that as soon as possible.  We wouldn’t want that tape to accidentally get erased, would we?

So what do you think?  Do you think Ken will even bother to check into this?  Whatever, you can rest assured the Ol’ Dog will not remain in the background on this one!  More to come!

One thing the Ol’ Dog can guarantee you is that the number of viewers which NBC claims is  watching their telecast will not be Deflated!  Woof!  Woof!

The Ol’ Dog Cast his vote On line!

Okay voting on line is fast, cheap and easy!  And one thing for sure there won’t be a recount!  How did the Ol’ Dog vote?  But, but, but it was a secret ballot!  NO!!!!

Ballots–Whether submitted online or by ballot–must be received by 5:00 PM PDT on Friday, August 22. 2014.

For our Old Timers “A Taste” that’s the equivalent of Lee J. telling Marlon in ” On the Waterfront”…”You saw some money!”

Ah, okay…at this point,  on this ongoing story (See earlier posts) I have received  four residual checks from 20th Century Fox  totaling 360 dollars,  three have been marked “void” and only  one for THIRTY-SIX DOLLARS is cashable..  Huh?  Okay, I don’t expect 20th to let me know what’s going on.  But, but, but is it expecting too much for our paid staff, who are supposed to have our backs, in regard to such matters, to keep us informed on the situation?   If this continues, one might begin to think those  at the top don’t give a Flying Duck about our struggling membership…or if yours truly Quacks UP! 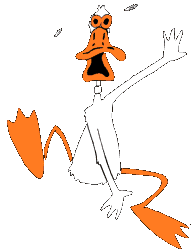