A change in timing generated opposition, but most of the alterations were cosmetic.

The Writers Guild of America has made some changes to its theatrical credit rules, with members of the West and East affiliated guilds approving the proposals with a 76 percent yes vote, the guilds announced Monday in an email.

Most of the changes are cosmetic and involve clarifications to the guilds’ screen credits manual, which is one of the key documents governing the credit process. The only material change involves the timing of credit arbitrations.

“There were no changes to substantive rules,” said Lesley Mackey, WGA West senior director of credits. She noted that similar revisions were made in 2010 to the television credits manual.

The timing change did garner opposition, which Mackey attributed to a misunderstanding of the revision. Understanding the revision requires a bit of a deep dive, since the credit process is complex.

When principal photography is completed, the studio or producer sends a “Notice of Tentative Writing Credits” to all writers who wrote on the project, referred to as “participating writers.” But frequently, not all participating writers will get credit on the finished film, due to the presence of multiple writers and rewrites, and the fact that guild rules limit the number of writers who can get credit, in order to enhance the status of writers.

As a result, a writer deprived of credit may choose to protest the NTWC. That triggers a credit arbitration conducted by the guild. Credit arbitrations can also be triggered automatically, if a director or producer is proposed to receive writing credit.

The credit arbitration consists of a panel of three writers who read all of the treatments and scripts on the project, as well as statements submitted by the participating writers that argue for or against the proposed credit. The arbitrators ultimately decide what the credit will be, sometimes agreeing with the NTWC and sometimes not. (There also is an appeal procedure from the arbitrators’ decision.) The results are sometimes contentious, but courts have upheld the process as fair and reasonable.

Under the previous rules, writers technically had only 24 hours to submit those statements, with the clock running from the time they learned there would be an arbitration. Under the new rules, they will have 72 hours, and the clock will not start running until all of the treatments and scripts have been gathered.

Lost in all this minutiae is an important principle: The guild, not the studio, has the final say on who gets credit on a screenplay. It’s somewhat remarkable, given that the studio pays for and owns the script.

But control over credits was one of the founding tenants of the guild, meant to counter credit abuses during the 1930s studio system in which credit was sometimes given to a producer’s paramour or a favored scribe who hadn’t even worked on the script. Today, those abuses are mostly a thing of the past, at least on projects produced by WGA signatories.

*Credit for the Headline photo goes to  the Hollywood Reporter

Now in its sixth year, the program seeks to identify outstanding historically underrepresented writers and make their scripts available to entertainment industry decision-makers — including producers, studio executives, agents and managers — to help raise their profiles and generate potential employment opportunities.

This year’s honorees and their screenplays are:

As part of the program, the guild hosts a series of workshops covering industry topics such as how to pitch themselves and an evening with screenwriter Michael Golamco (Please Stand By), as well as meet-and-greet mixers with development executives, agents and managers.

“The meet-and-greet session puts them in front of those that can hire them, an opportunity some might not have otherwise, especially if not currently represented,” said Tery Lopez, the guild’s director of inclusion and equity.

Amid SoCal Fires, Actors Fund and SAG-AFTRA Partners Activate Disaster Relief — and Not Just for Actors

“Whether you work on stage or on camera, behind the scenes or below the line,” the Actors Fund says it can help.

As firefighters continued to battle the massive Southern California Hill and Woolsey fires that have killed two people, driven a quarter-million from their homes and left an unknown number homeless, the Actors Fund, SAG-AFTRA Foundation and SAG-AFTRA Motion Picture Players Welfare Fund have activated disaster relief.

And despite the name, the Actors Fund assistance is available to a wide range of industry workers. The organization’s slogan tells the story: “The Actors Fund, for everyone in entertainment.” The fund is administering its own monies and also those of the two SAG-AFTRA affiliates.

“Within the past 24 hours we began rolling out the activation of this fund,” foundation executive director Cyd Wilson said. “The relief fund … [will] be administered on the ground by the Actors Fund social workers.”

The Woolsey Fire has burned 83,000 acres in Ventura and Los Angeles counties, including Malibu, and has destroyed 177 structures. On Sunday, the blaze was only 10 percent contained.

Another entertainment industry welfare institution, the Motion Picture and Television Fund’s retirement home, is actually located in Woodland Hills near the evacuation zone, but is in no immediate danger of fire or evacuation, according to a spokesman.

“LA Fire Department confirmed that MPTF Wasserman campus is not under threat by recent flareups,” says the organization’s website, updated Sunday afternoon. “Los Angeles Fire Dept. and Los Angeles Police Dept. continue to advise us to shelter in place. In the event of additional fire threats, LAPD and LAFD have plans and resources in place to surround and defend the campus.”

Meanwhile, the Actors Fund had no data yet on the number of people requesting assistance. Those who need aid can find contact information and an online application at actorsfund.org/am-i-eligible-help.

Says the webpage, “Whether you work on stage or on camera, behind the scenes or below the line, you can contact The Actors Fund for support.”

Gosh and I didn’t even know she cared.

I received the  following personal message in my e-mail :

Risks to our personal data can sometimes be hard to spot. They could come from a phishing email, or even an in-person request for your name, phone number, email or SAG-AFTRA membership number.

We advise members not to share this kind of confidential personal information with unknown organizations or persons. At a minimum, it can lead to further unwanted solicitations. But in some cases, it can also open you up to being hacked or having your identity stolen.

We strive every day to keep your data safe and secure, and encourage you to be vigilant in your own personal cyber security.

If you have any questions, or are worried that your information was compromised, please call SAG-AFTRA at (855) 724-2387, or email info@sagaftra.org

In unity and solidarity, 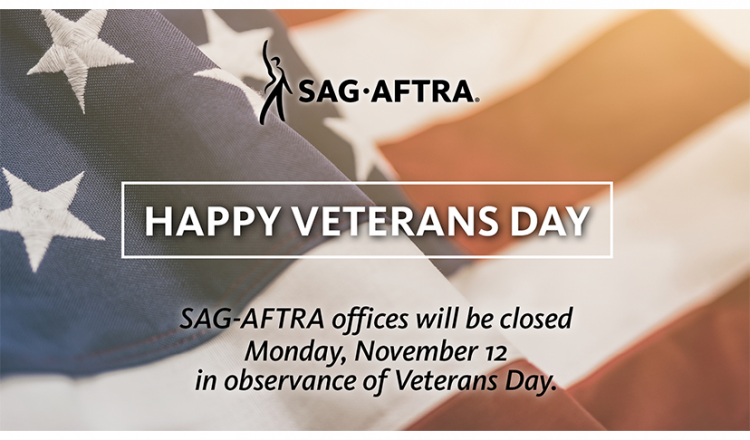 SAG-AFTRA honors and thanks all those who have served our country.

In observance of Veterans Day, SAG-AFTRA offices will be closed on Monday, Nov. 12 and will re-open on Tuesday, Nov. 13.