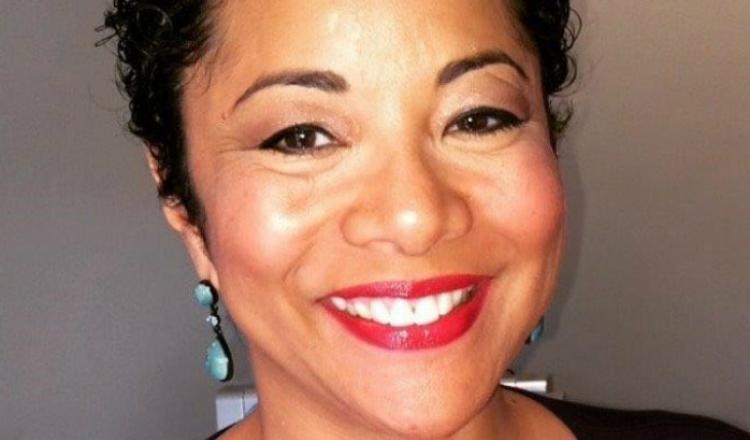 “It is with deep sadness and regret, as well as joy and gratitude, that we mark the life and transition of Susan Watanabe, the extraordinary wife of David White.

“Susan was a warrior with a gentle soul. Among her many noteworthy contributions to humanity, Susan changed lives as a social worker, community activist and curious spirit whose keen insight ultimately led to a career as a television writer.

“David once said that Susan was the center of good in their universe. Whether reading with their daughter Sophia, or discovering new wonders of joy with David, she was a towering presence of love and comfort. She was also a woman of uncommon grace whose serene countenance hid a tremendous sense of humor.

“Her presence will be missed, but her brilliant light will never dim.

“On behalf of our membership and staff, I send our love and condolences to David and Sophia, their family and friends.

“Rest in peace and power Susan.”

Specific details about her death have yet to be announced, but Watanabe White, who diagnosed with an inoperable brain tumor,  founded Susan Circle in April 2017, an organization that works with the Liberty Hill Foundation to identify and invest in leaders who have taken on the responsibility of public service and have inspired the participation of others to make our communities and country better for everyone.

Watanabe White, and her husband David shared a commitment to advancing social change and Watanabe White was a living testimony of how our democracy is strengthened by participation. Her legacy and social advocacy will live on via Susan’s Circle and her husband.

Our condolences to Mr. White and family.

Headline Photo was included in the article

The petition was started by Reel Equity, a collective of film industry professionals and their allies, which says that Hollywood’s “long history of gender segregation and stereotyping – and a current culture of gender bias and sexual harassment in film and television production – affects the work opportunities available to members of these female-dominated crafts and how the industry values their contributions.”

The petition (see it here) is endorsed by Women in Film, IATSE Local 871, the ACLU of Southern California, the National Women’s Law Center, Equal Rights Advocates, Women in Media, and numerous other organizations.

Here is the open letter in its entirely:

While our positions are central to a production running smoothly and being kept on track, we are not paid on par with our counterparts on the crew. In fact, the scale rates for Art Department Coordinators and Assistant Production Coordinators are barely above minimum wage.

In the current age of #MeToo and the launching of Times Up we have seen that some production companies have moved to correct gender-based wage inequality for actors working on the same projects, but there has not been any similar effort made to address wage gaps for those working behind the scenes.

With your help we can demonstrate that this issue has the support of our fellow industry members and the viewing audience at large. We will be delivering this letter to the heads of major studios, networks and production companies as we push them to address this issue.

It’s in the name of Equality! 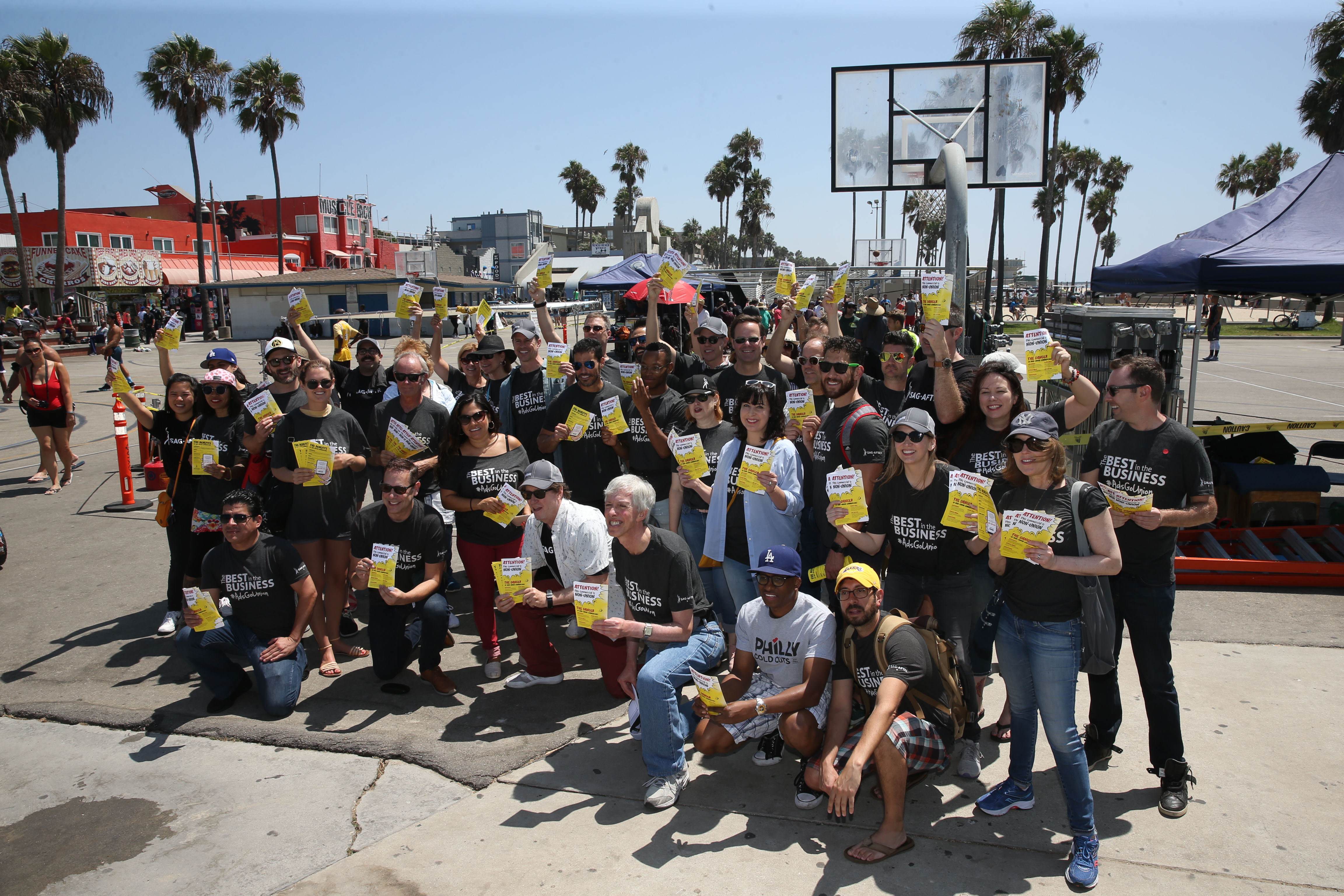 SAG-AFTRA on Thursday staged an educational leafletting with approximately 40 members in front of a non-union commercial production on Venice Beach.

SAG-AFTRA members passed out literature and informed the cast, basketball players and beachgoers about the benefits of working union, which include better wages, health and pension benefits and safe sets, as well as the dangers to performers of non-union work.

Thursday’s event is part of an ongoing educational and commercial organizing effort that has mobilized thousands of SAG-AFTRA members across the country. In addition to grassroots members working to counter the growth of non-union commercial production, the union is disciplining members who accept non-union work.

SAG-AFTRA is also undertaking an extensive outreach effort to grow commercial work opportunities for professional performers on union contracts. This industry outreach and relationship building efforts are paying off. For instance, The Honest Company, founded by member Jessica Alba, this week signed the union’s Commercials Contracts. This win-win arrangement allows Honest access to the union’s strong talent base, while assuring that performers on all of the company’s commercials are paid fair wages, and are eligible to receive pension and health benefits.

Way to go Leafletters!  Now that’s something one doesn’t get too many chances to say!  Woof! Woof!

*Headline photo along with others at the  SAG/AFTRA Website

UPDATED with tweet from Jessica Alba: Jessica Alba took to Twitter to address the settlement with SAG-AFTRA and The Honest Company.

“We (Honest) have been in talks with @SAGAFTRA since last week & just finalized our agreement–always our intent,” she wrote. “I support fair pay + working conditions for all actors. Partnering has always been a natural next step in our evolution. Looking forward to a productive partnership.”

PREVIOUS: SAG-AFTRA has settled its dispute with Jessica Alba’s The Honest Company, signing it to the union’s commercial contract after earlier this week ordering its members not to work on ads for her line of home products.

“I am thrilled that The Honest Company has chosen to provide our members with the protection of a SAG-AFTRA contract,” said SAG-AFTRA president Gabrielle Carteris. “This partnership is the result of meaningful collaboration between SAG- AFTRA and Honest and helps sustain and build a flourishing industry for performers and employers.”

“SAG-AFTRA is an important part of the acting community, and as a proud member since 1994, I fully support its mission,” Alba said in a statement. “As founder of The Honest Company, I’m thrilled that the company has grown to a place where working with SAG-AFTRA is a natural next step for us. I’m looking forward to a productive partnership.”

Alba, Carteris said, “Is a model of ethical leadership and we’re proud to move forward together.”

“We look forward to developing a great relationship with The Honest Company and hope this inspires other brands looking to create quality commercials to go union,” said David White, the union’s national executive director. “Hiring union actors for their ads is the best decision brands can make for their business.”

The coming together of the union and a company owned by one of its prominent members got an assist from Killian McHugh, the commercial acting coach and leader of a grassroots effort that’s encouraging similarly situated celebrities to sign the union’s contract. Earlier this week, Killian appeared to have brokered a peace between SAG-AFTRA and The Honest Company. Reaching out personally to the company, he’d received their assurance that they would try to negotiate a deal with the union. SAG-AFTRA, however, said ‘not so fast.’ Two hours after Deadline posted a story about Killian’s efforts, the union said it hadn’t reached a deal with the company, and issued its “do not work order.”

The signing of The Honest Company to SAG-AFTRA’s contract is part of the union’s ongoing campaign to combat non-union commercial production. In the past year, the union says it has caught more than 130 of its members who have worked on non-union ads and sent them through the guild’s disciplinary process, where they face fines, suspension or expulsion.

We (Honest) have been in talks with @SAGAFTRA since last week & just finalized our agreement–always our intent. I support fair pay + working conditions for all actors. Partnering has always been a natural next step in our evolution. Looking forward to a productive partnership.
7:47 PM – Aug 22, 2018″