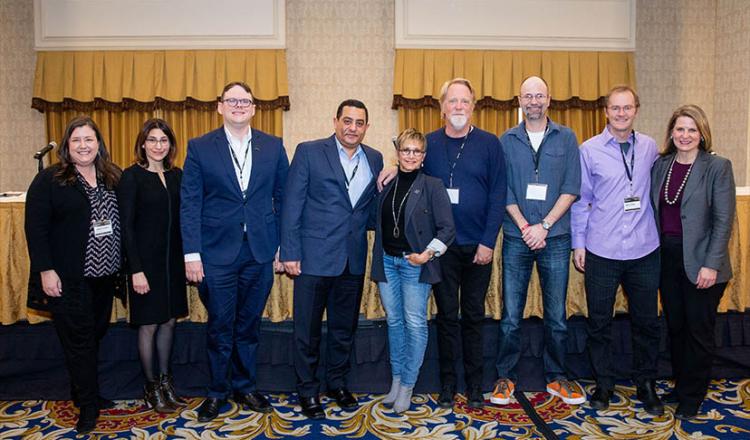 SAG-AFTRA, in partnership with the AFL-CIO, hosted the 2nd Annual Labor Innovation and Technology Summit in Las Vegas from Jan. 6–8. Coinciding with CES, an annual trade show organized by the Consumer Technology Association, the summit was an opportunity for leaders within labor, entertainment, technology and academia to discuss technology’s far-reaching effects in the workplace, on unions and workers, and society at-large. SAG-AFTRA President Gabrielle Carteris, Executive Vice President and New Innovation and Technology Committee Chair Rebecca Damon, and National Executive Director David White were among those in attendance, as well as AFL-CIO Secretary-Treasurer Liz Shuler, UNITE HERE International President D. Taylor and leaders from the American Federation of Teachers, United Steelworkers and others.

“Technology has grown exponentially, and it’s imperative that we stay in front of these advancements,” said Carteris in her keynote address.

“Those of us representing working people and the companies with which we engage have a tremendous opportunity to ensure the awesome power of technology is balanced with the basic values of treating people fairly, respecting their privacy and protecting their right to personal integrity,” added White.

This year, the summit livestreamed two panels. The first, The Ethics of Transformation: How to Protect Workers in a Rapidly Evolving Technological Environment, focused on how workers’ rights are affected as the use of automation and artificial intelligence in the workplace continues to grow. The panel was moderated by anchor and correspondent for ABC News Radio Cheri Preston, and panelists included White, Shuler and Taylor, as well as Lee Branstetter, director of the Future of Work Initiative at Carnegie Mellon University; and Louis Hyman, director of the Institute for Workplace Studies at Cornell University ILR School.

“There are a lot of stereotypes that are alive and well with regards to the labor movement,” said Shuler. “But we are more relevant and more needed than ever, and we are actually at the forefront of change. … It’s up to us to really show what we do and reach people in new and different ways.”

“We can’t rely on the ethics of technology companies to help us; we have to stand up for ourselves to make sure that we’re using the maximum collective bargaining strength that we’ve gained to balance the power between workers and the companies that employ them,” said Crabtree-Ireland. “We need to make technology work for us, not against us.”

The summit concluded on Jan. 8 with a curated tour of the CES exhibition hall and included demonstrations of a variety of new and developing technological products.

Preparations are underway for the next Labor Innovation & Technology Summit in 2021.

And as we all know Vegas is the best place to be to accomplish all of the above!

IATSE President Matt Loeb Urged To Protect Union’s Pension and Health Plans In First Contract Talks With Netflix Streaming Residuals Could Set The Stage For A WGA Strike In 2020, But Would Packaging Play A Role?

Hollywood’s TV, film production cut in half this summer due to COVID-19

SAG-AFTRA lays off dozens more amid the pandemic.