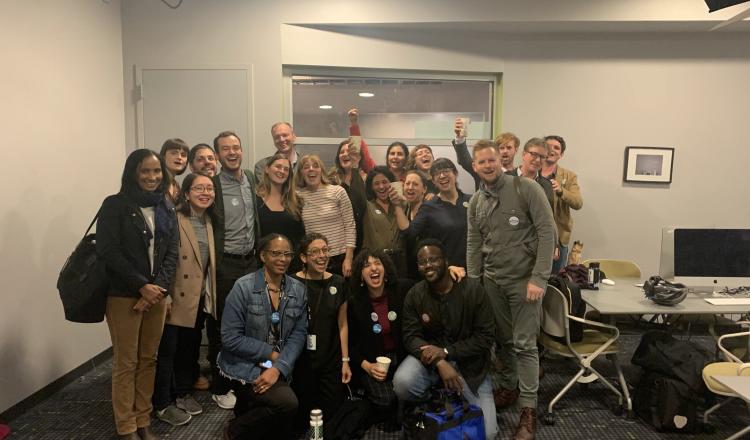 LOS ANGELES — Today, content creators at WHYY-FM in Philadelphia voted overwhelmingly to recognize SAG-AFTRA as their union with 99 percent voting in support. The election was conducted by the National Labor Relations Board. The victory allows the unit to proceed with negotiating a first contract.

The new bargaining unit will cover the public media professionals who create content for all areas of the station, including radio, television and digital. It also covers those working in the news department, on the digital team, on podcasts, in the production departments and on Fresh Air with Terry Gross, The Pulse, Billy Penn, PlanPhilly, Radio Times.

“On behalf of our membership, I am honored to welcome WHYY to SAG-AFTRA and support them in their fight for a fair first contract. WHYY produces some of the most compelling, informative and diverse programming heard in Philadelphia and across the country. SAG-AFTRA is committed in supporting public media professionals as they look to organize,” said SAG-AFTRA President Gabrielle Carteris.

Adds the WHYY Organizing Committee, “We’re thrilled by our strong showing. We look forward to beginning a democratic process to hear from our members about what they would value most from a contract with management.”

“The recent organizing wave at NPR member stations is reflective of more and more employees seeing the value of a collective voice as public media continues to grow, and a continuing investment by SAG-AFTRA in elevating the voices of public media professionals through union organizing,” said SAG-AFTRA National Executive Director David White.

Starting in 1976 when NPR employees first organized, SAG-AFTRA has played a vital role in giving public radio employees a collective voice. WHYY represents the latest in a series of organizing victories for professionals in public media. In recent years, employees at KPCC in Pasadena; KPBS in San Diego; WBEZ in Chicago; KUOW in Seattle; Minnesota Public Radio; digital, per diem and Gothamist employees at New York Public Radio; WBUR in Boston; and KCRW in Santa Monica have all unionized with SAG-AFTRA. SAG-AFTRA also represents public media professionals at National Public Radio and several other public radio and television stations.

Facebook Comments
WGA Gearing Up For Contract Talks With Studios – And A Possible Strike In May – Amid Ongoing Battle With Agencies *Do Not Work Notice: The Tiger Rising