UPDATED with Goodman and Nagy reaction: David A. Goodman has been re-elected president of the WGA West, defeating opposition candidate Phyllis Nagy in a landslide. His re-election, in a record turnout, is a solid endorsement of the guild’s five-month-long agency campaign, which was the main issue in the race. It could also strengthens the guild’s hand going into next year’s negotiations with management’s AMPTP for a new film and TV contract.

Goodman received 4,395 votes (77.3%) to Nagy’s 1,292 (22.7%). All of Goodman’s running mates were also elected. Marjorie David, running unopposed – after Craig Mazin and Carl Gottlieb dropped out of the race – was elected vice president, and Michele Mulroney was elected secretary-treasurer. She defeated Nick Jones, Jr., who received 1,256 votes, and Evette Vargas, who got 203.

A total of 5,809 valid ballots were cast. Representing 58% of eligible voters (9,988), it represents the largest turnout in guild history and more than doubles the previous record turnout of 2,475 for the 2018 Board of Directors election.

“This vote shows that writers have overwhelmingly given me and the leadership a mandate to continue the strategy we’ve been pursuing,” Goodman told Deadline tonight. “Seventy-five percent of the vote in this huge turnout really says a lot about how writers are feeling about this (agency) campaign. What’s interesting to me too is that my opponents ran on a platform that said that they agreed with the goals, if not the strategy, and so I think that means that across the board, our membership wants us to try to fix this situation with the agencies. So it’s a strong mandate – not just for me, but for the candidates that I ran with, and we’re going to continue to pursue the strategy.

“The election, unfortunately, put some things on hold; agencies that were negotiating with us decided to stop and wait for the results. And now that the results are in, hopefully they’ll come back to the table.”

The results are in for this year’s @WGAWest Officers election, which saw the highest turnout in recent history. To all our members who ran, campaigned, and voted, thank you for supporting a thriving culture of democracy within our union! http://bit.ly/2lQOmfF 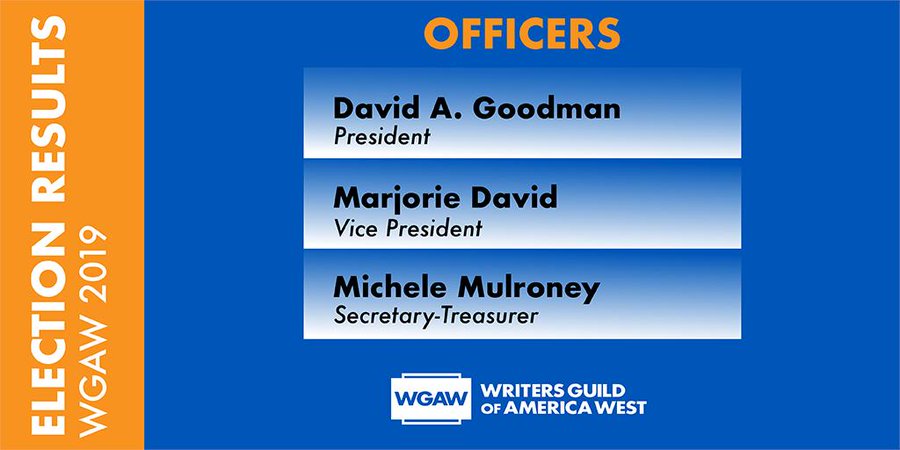 The results are in for this year’s @WGAWest Officers election, which saw the highest turnout in recent history. To all our members who ran, campaigned, and voted, thank you for supporting a thriving culture of democracy within our union! http://bit.ly/2lQOmfF

In his official campaign statement, Goodman urged members to “hold together” and stay the course in the guild’s battle with the agencies. The guild in mid-April ordered all of its members to fire all their agents who refused to sign the WGA’s Code of Conduct, which now bans packaging fees after one year and prohibits agency affiliations with corporately related production entities.

The WGA and the Association of Talent Agencies haven’t met face to face at the bargaining table since June 7, when the ATA offered to share 2% of backend packaging profits with writers. The guild, however, flatly refused the offer, and has been trying to work out separate deals with the agencies. So far, however, only two mid-size agencies – Buchwald and Kaplan Stahler – have broken ranks and signed the guild’s code.

“We’ve said we’re not negotiating with the ATA as a group,” he said Monday, “but we certainly would negotiate with any agency that wants to make a deal with us. And I say this with complete confidence – all the agencies want this campaign to come to an end, as do all the members of the Writers Guild. So hopefully, there will be movement with all the agencies. The members of the Writers Guild have sent a very clear signal that they support the strategy that the leadership has been pursuing.”

“We still represent all the members,” he added, “and we’re still going to listen to all of our members. And for right now, the majority is saying ‘Keep going,’ and that’s what we’re going to do.”

Nagy had said that if she’d won, she would have sought a quick return to the bargaining table to negotiate a new deal with the ATA.

“We congratulate David Goodman and the elected officers and board members on their victory,” Nagy and her WGA Forward Together slate said in a statement. “Elections crucially give voice to opposing points of view, and while our strategies may differ, our goals are the same: to serve the best interests of our fellow members. We remain committed, passionate advocates for our Guild who believe that far more unites us than divides us. We were honored to hear the concerns and perspectives of so many writers, and look forward to participating in the next chapter of the Guild’s proud history.”

Noting that the agency campaign will also impact the guild’s leverage in its upcoming talks with the AMPTP, Goodman previously said that “It’s important to consider the current business landscape. All the major AMPTP companies are launching streaming services to compete with Netflix, Amazon, and Apple. As important as libraries are, the big companies can’t rely on their libraries to get subscribers; they need a steady stream of new product to build that base, and they need writers to write that product. It will take the AMPTP companies years to get to the subscriber numbers they need, and they will not just be competing with the established streaming companies but also with each other to get those subscribers.

“And though companies like Netflix and Apple have to adhere to the MBA if they want to use Guild writers, those companies are not represented in the AMPTP negotiations. The AMPTP companies understand that, if they pushed us to a strike, the threat that Netflix or another company would make an interim deal and keep producing new product is very real. The billions that the AMPTP companies have invested in their new streaming services would be at risk. That doesn’t mean that the AMPTP is going to roll over, but they have too much at stake to just push us around because they think we’re ‘tired.’ On top of that, we have shown that we are willing to take on an issue that everyone in the business (except the agencies) hates, but was unwilling to do anything about. The writers of the WGA have once again shown bravery and sacrifice, and that will give the AMPTP pause; it was this pause that led to the success of the 2014 and 2017 negotiations.

“For these reasons, whatever leadership decides our agenda is, we will go into negotiations in a very strong position. And as far as threatening our ‘alliance’ with agencies, I’ve been involved in four WGA MBA negotiations, and in all of them the agencies offered no help, in fact abandoned us and worked against our goals by describing us to their clients as intractable and unrealistic.”

Hmmm…A “Strong Position “…not a bad place to be!  Stay tuned,