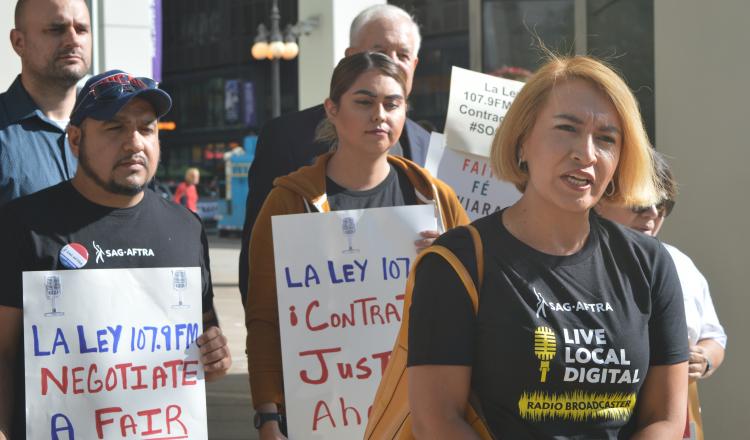 In September 2018, the on-air talent at La Ley 107.9 voted overwhelmingly to form a collective bargaining unit represented by SAG-AFTRA, but SBS refuses to agree to improve the compensation structure for their employees who have continued to generate ratings and revenues for these stations. SAG-AFTRA is currently fighting for the rights of unionized employees at two other SBS radio stations in Los Angeles, La Raza (KLAX/KXOL 97.9 FM) and MEGA (96.3 FM).

SAG-AFTRA’s Chicago Local Executive Director Eric Chaudron said, “We’re here to ask an important question: Why are La Ley and SBS needlessly punishing their loyal, longtime employees by unilaterally cutting their income by tens of thousands of dollars? The company actually furloughs their workers at Christmas time. No work and no pay during the holidays is beyond cruel. It’s incredibly difficult and demeaning to their employees and their families and now some of these workers are struggling to make ends meet.”

Iridian Fierro, a production assistant and on-air personality at La Ley shared, “I make minimum wage and we are fighting for a fair contract that respects us.”

Added La Ley sports commentator Elizabeth Jiménez, “I have worked in Chicago as a radio personality for 18 years and all we are asking for is to be paid a fair wage. We are a small team of on-air personalities and producers, but know that united we can work together to achieve a union contract.”

Added Rev. C.J. Hawking of Arise Chicago, “We are calling upon La Ley to be a good community leader by treating their workers fairly and paying them professional wages. If La Ley management values their listeners, now is the time to listen.”

The above including photo from the SAG/AFTRA website.  For more photos and message in Spanisg go to the website, (Link above)  Por favor, estad atentos